May 23: Three Weeks Away

Quick reminder it is three weeks until the big day, the now-infamous Bastard Hills of North Bristol event. This one, St Michael's Hill, is obviously part of it, but it is not as steep as some of the others. As the first person to complete the route in one go noted

Once I had traversed the true bastard that is Marlborough Hill (right) and sped down Horfield Road, climbing up St Michael’s Hill didn’t seem half the challenge that it normally is. 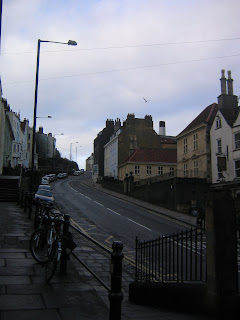 That said, the route plan will do it both up and down -the descent can be a bit tricky as you have to give way at the bottom. There is a draft route plan online, but note that this is provisional, and we may throw in some surprises. Certainly Nugent Hill provides more suffering than turning off at the first opportunity to get to Ninetree Hill offers -surely the second or third exit should be used instead. Similarly, around Park Street there a couple of detours which make things harder. We will see as the day goes on. One goal is to avoid killing everyone in Montpelier within ten minutes of setting off, so we will avoid the York Road descent followed by a Richmond Road ascent. As York Road is likely to be closed for roadworks, this is a wise choice.
Bridge Valley road may be open by May 23, but the shared use pavement/bike path is open today, so anyone who wants to train can check it out now.
Some of us plan to combine a bit of route rehearsal and obstacle checking by doing the entire route early one evening as a preamble to the main group event. If that kind of thing appeals, get on the Bristol Cycle Campaign Yahoo! group and its mailing list. Before that, get your bike working, check its brakes and gears are as expected, get climbing!
Posted by Bristol by Bicycle at 19:44